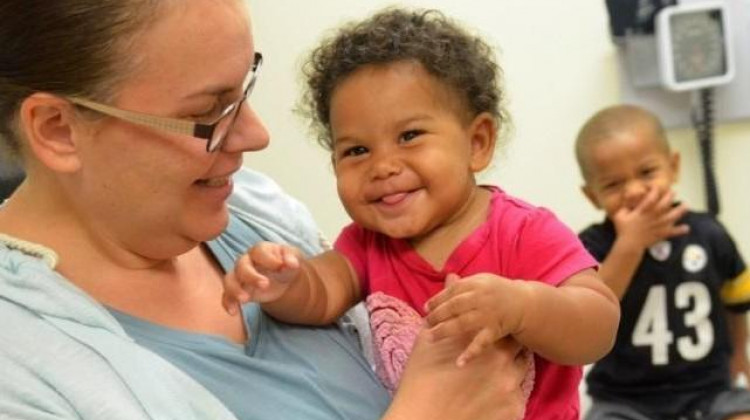 Indiana is considering lowering its threshold for when public health agencies address elevated blood lead levels in children — based on a nearly decade-old recommendation from the Centers for Disease Control and Prevention. The agency recently changed that threshold again — and it’s unclear if the state will follow suit.

Lowering the blood lead threshold would mean a lot more kids exposed to lead could get access to services — like home lead assessments, nutrition advice, or even specialized therapy. The Indiana Department of Health also has plans to use money from a $50 million grant program to address lead issues.

Heidi Beidinger is the president of the St. Joseph County Health Department and researches ways to reduce child lead poisoning at the University of Notre Dame. She said the change would also allow the state to educate more parents.

“Lots and lots of people know that lead is here and they know that lead is toxic. But when we’ve done our surveys and focus groups, people don’t perceive that threat to themselves or their family. So we have to ramp up that awareness,” Beidinger said.

Late last month, the CDC lowered its blood lead threshold for children again — from 5 micrograms per deciliter to 3.5 mcg/dL — putting Indiana’s current standard of 10 mcg/dL even further behind.

Garry Holland is the education chair for the Indianapolis branch of the NAACP. He said matching the CDC’s guidelines will save the state money in the long run.

“Helping and assisting these children now versus when their conditions are at a point when the state has to spend more money on special ed or mental health services,” Holland said.

The Indianapolis NAACP recently passed a resolution in support of the state lowering the blood lead threshold and federal funding to replace lead pipes and service lines in the recent infrastructure bill, among other things.

Several studies have shown how lead disproportionately affects African American communities. Holland said the NAACP wants to make sure that funding from the infrastructure bill goes to help those most affected.

“When you look at the areas that have been, for years, in our community that may have had lead companies and other industry in the area where the contamination has happened. We want to ensure that those areas in our communities have a fair and equitable chance to be able to have their communities repaired when it comes to that,” he said.”

The resolution by the Indianapolis NAACP also urged the state to appropriate additional and ongoing funding to lead poisoning prevention efforts.

Holland said by the time kids exposed to lead reach high school, that damage can be hard to undo.

Beidinger recommends anyone living in a home built before 1978 get their home — and their children — tested for lead. Private drinking water wells should also be tested for lead.

Beidinger said parents or guardians can ask their child’s pediatrician to test their blood for lead or their county health department. IUPUI and the Indianapolis Ministerium are also working to provide free, anonymous lead testing kits to Indiana residents.

You can find out more about lead and other hazards in your home and neighborhood here.