Indiana Residents Share What Precision Health Means to Them

Over the summer, the All IN for Health team set up at the Indiana State Fair to talk to Indiana residents about the latest topic in science and medicine:  Precision Health.  While many people are familiar with the term Personalized Medicine or Precision Medicine, the concept of “Precision Health” is still new to many.  So we surveyed over 500 people to see what your take is on Precision Health.

First, we asked:  “Have you heard of Precision Health?” 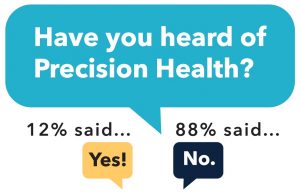 The majority of you said that you have NOT heard of Precision Health.  This tells us that doctors and researchers have a lot more explaining to do before the majority of us are familiar with the term.

Some key parts of precision health were mentioned, such as individual health and medical treatments.

but a big part of precision health was missed by most: 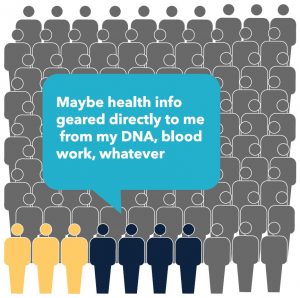 Only 7 out of 100 people mentioned DNA or genetics.

And of those 7, only 3 were from the group who had heard of Precision Health.

Researchers, doctors, and nurses should help their patients and community members understand that Precision Health is a highly personalized approach to helping people prevent and treat diseases based on their individual genetics or DNA, environment, and lifestyle.  In other words, health and medical treatments are not one size fits all!

Pictures helped…but only for some.

Only 32% of people recognized this double helix image as having something to do with DNA, genetics, genes, or chromosomes.

We also asked Hoosiers if they would participate in a Precision Health study such as the study being launched by Indiana University?  The majority of our survey respondents said “Yes”! 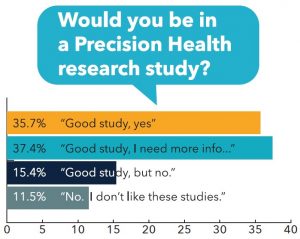 And the majority of survey respondents said they would donate their spit to science to help learn about themselves and to help others (Hoosiers are awesome)! 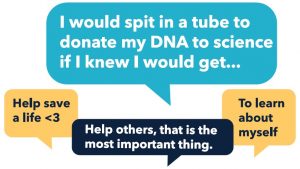