What’s the deal with electronic cigarettes?

Editor’s note: many thanks to guest author Emily Poulin for this post. Learn more about Emily below.

As I rode up a chairlift this past winter, a cloud of grape-scented vapor engulfed me from the stranger sitting next to me.

As I looked over at him, expecting him to ask if I minded, he carried on as though nothing was wrong. He never asked if I minded if he vaped while sitting next to me on a chairlift I couldn’t get off of, or whether the vapor bothered me.

That’s the thing with electronic cigarettes (known as e-cigarettes). No one seems to think they are a big deal. And maybe for some, compared with conventional combustible cigarettes, they’re not. However, although e-cigarettes were seemingly designed for a good purpose – to offer a safer option for nicotine delivery – they are not harmless. And particularly for the millions of youth who use them, they have become a huge problem. 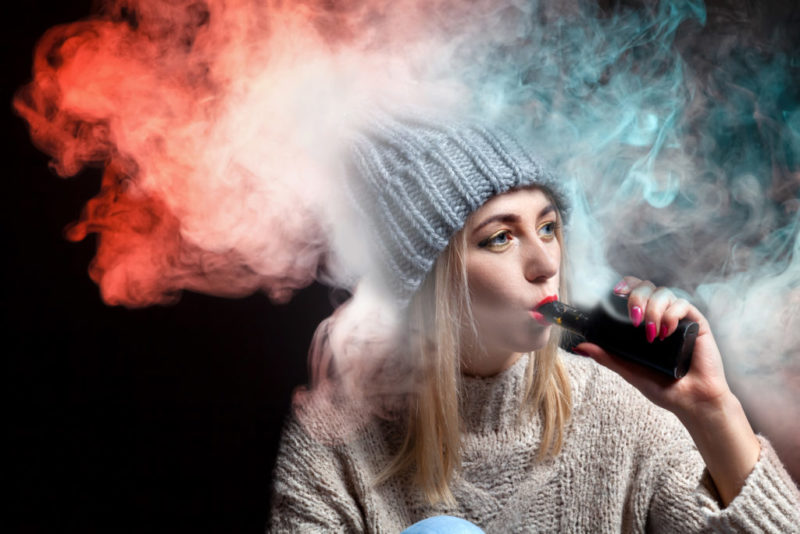 What do you really know about e-cigarettes, how they work and what is in them? You might be surprised… read on.

What are e-cigarettes and how are they different from conventional combustible cigarettes?

The health dangers of combustible cigarettes are many and the nicotine in them makes them easy to use and hard to quit. E-cigarettes, first introduced to the market in 2007, are an alternative nicotine delivery system. Because of how they work and what is supposedly in them, they have been marketed as a safer alternative.

Combustible cigarettes deliver nicotine through the smoke of burning tobacco. E-cigarettes work by heating a liquid containing nicotine (yes, your vape liquid very likely contains nicotine) and other ingredients, which creates a water vapor that is then inhaled. Hence, the term “vaping.”

What are the dangers of smoking?

The health risks of smoking conventional combustible cigarettes have been recognized for decades. One out of every five deaths in the U.S. are due to smoking-related causes, including 80% of all lung cancer deaths. Horrifyingly, half of all American smokers will die due to their habit.

In addition to cancer, smoking damages the lungs and causes a number of other harmful conditions. Chronic obstructive pulmonary disease (COPD), a group of progressive lung diseases, is the third leading cause of death in the U.S. and is most commonly caused by smoking. Chronic bronchitis and emphysema are types of COPD, both of which disrupt the respiratory system and make it difficult to breathe.

Did you know? Both smoking and lung conditions like COPD are used as strong predictors in estimates of biological age – they age you.

Smoking can also negatively affect the cardiovascular system, increasing the risk for heart disease, heart attack and stroke. Smoking can do this over time by causing coronary heart disease, increasing blood pressure and plaque buildup in the arteries, and contributing to poor blood flow to the extremities. In fact, smoking causes one out of every three cardiovascular disease-related deaths.

Both smoke and e-cigarette vapor contain heated chemicals that can harm your health. Photo by Thomas Stephan on Unsplash.

How do cigarettes cause cancer?

The fact that smoking causes cancer (particularly lung cancer) has been known for more than half a century. In the U.S. this year alone, the American Cancer Society estimates that approximately 228,000 people will be diagnosed with lung cancer and it will kill just over 142,000 people. It is consistently one of the most deadly cancers and importantly, because the majority of cases are caused by smoking, it is also the most preventable.

Cigarettes contain around 600 ingredients and when burned, release approximately 7,000 chemicals of which at least 69 can cause cancer. These carcinogens may include polycyclic aromatic hydrocarbons, N-nitrosamines and aromatic amines. Repeated exposure to these chemicals causes damage to the DNA of cells in the lung, which over time can cause cancer. All of our cells contain the same copy of DNA which is essentially the master blueprint or code for maintaining homeostasis – a stable state of equilibrium – within the body. Certain types of DNA damage disrupt the DNA code, which can affect homeostasis and in some cases initiate formation of a tumor.

What is nicotine and how does it affect the body?

Cigarette smoking is notoriously addictive due to one chemical component of cigarettes: nicotine. Nicotine is not what makes smoking tobacco so dangerous, but it does cause the addiction responsible for the continual need to smoke. This ultimately contributes to long-term use of tobacco products and chronic exposure to the toxic and carcinogenic (“cancer causing”) compounds in them.

But nicotine has other harmful effects on the body. It can increase blood pressure and heart rate as well as narrow the blood vessels, all of which contribute to negative effects on cardiovascular health and increase the chances of having a heart attack.

Nicotine’s effects on the brain are perhaps the scariest of all. When nicotine is absorbed through smoking, it goes to the brain where it acts on the pathways that control memory and emotional processing. In the developing adolescent brain, nicotine is particularly harmful.

A 2016 report from the Surgeon General reported that “Compared with older adults, the brain of youth and young adults is more vulnerable to the negative consequences of nicotine exposure. The effects include addiction, priming for use of other addictive substances, reduced impulse control, deficits in attention and cognition, and mood disorders.”

Tobacco use by teens has long been a significant health concern because of the very damaging effects of nicotine on the developing brain and the initial addictive properties that can lead to a lifelong smoking habit. 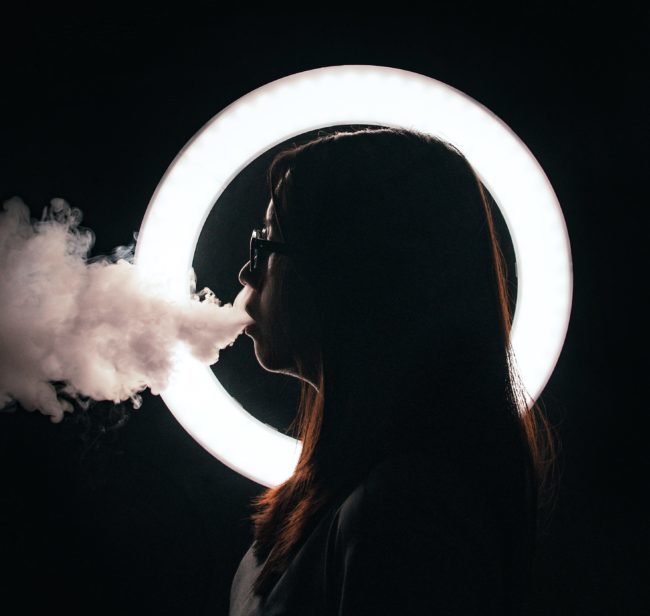 What’s the big deal with e-cigarettes?

According to the World Health Organization, combustible cigarettes kill up to 50% of people who use them. Sure, compared to something that kills every other person that uses it, vaping is probably better than smoking. But that doesn’t mean that it’s safe.

Although e-cigarettes contain less chemicals (and likely carcinogens) than combustible cigarettes, they have only been on the market for just over 10 years. It is completely unknown how they might affect health over time.

However, what we do know is concerning.

E-cigarettes contain nicotine, the addictive component of tobacco, and therefore act as an alternative nicotine delivery system. Although they are marketed as a tool to help stop smoking, they are not actually approved by the FDA as such.

One study recently published in the New England Journal of Medicine found that in adults, compared with nicotine-replacement products (patch, gum, lozenge, nasal spray, inhalator, mouth spray, mouth strip or microtabs), e-cigarettes were better tools to support quitting a smoking habit. However, the study authors also found that compared with the study participants who used alternative nicotine-replacement products, participants who used e-cigarettes used them more often and long-term. After one year of being in the study, 80% of the participants in the e-cigarette group were still using e-cigarettes, while only 9% of the participants in the other group were still using alternative nicotine replacement therapy. The authors commented that “The rate of continuing e-cigarette use was fairly high. This can be seen as problematic if e-cigarette use for a year signals ongoing long-term use, which may pose as-yet-unknown health risks.”

One of the major concerns today regarding e-cigarettes is not necessarily the adults who are using them to quit smoking. It’s a new generation of kids who use them and have become addicted to nicotine because of them.

One of the most well-known e-cigarette companies is JUUL. JUUL’s age verification statement on their website reads “JUUL Labs’ mission is to eliminate cigarettes. JUUL products are intended to adult smokers who want to switch from combustible cigarettes.”

But the early marketing campaigns told a different story, very clearly marketing to the younger generation that we now know has drastically increased its consumption of e-cigarettes. And guess who owns over one-third of JUUL? Altria, the parent company of Phillip Morris USA, and one of the largest tobacco companies in the world.

Although JUUL’s marketing strategy has toned down its targeting of kids, the damage might already have been done.

In an editorial in the New England Journal of Medicine, Dr. Jeffrey Drazen (also editor-in-chief) and colleagues expressed their concerns about flavored e-cigarette products.

“Since smoking is not a natural behavior, like eating or drinking, the manufacturers of these [e-cigarette] devices commonly add flavoring to the liquid from which the nicotine aerosol is generated, to make the initial exposure more pleasurable…the public health problem that e-cigarettes can help solve—by helping people who are users of combustible tobacco products stop smoking by switching to vaping—is adequately addressed by liquids that are not flavored to appeal to adolescents.” – Drazen, New England Journal of Medicine

Although not all e-cigarettes contain nicotine, nicotine-free vapor is not harmless. In particular, a study from last year demonstrated that the chemicals in e-cigarette flavoring can cause inflammation. (Inflammation is another factor that predisposes you to premature aging and chronic disease). Additionally, a new study from the University of Pennsylvania looked at whether vaping nicotine-free e-cigarettes affected the cardiovascular system in 31 healthy adults who had never smoked. Using magnetic resonance imaging, or MRI, they found that following inhalation of e-cigarette vapor, participants had reduced levels of oxygen in their blood and aortic stiffening.

This study is particularly important as it demonstrates that e-cigarette vapor itself, without the addictive nicotine, has damaging effects on blood vessel function that show up even with short-term use. Ongoing research will likely determine whether other chemicals in e-cigarette vapor pose any long-term health risks.

Statistics and research on e-cigarettes will continue to be gathered and longer-term effects of e-cigarettes on health will be further defined. Importantly, the FDA is now requiring e-cigarette manufacturers to apply for public health review by May 12, 2020 or their products could be removed from the market.

However, in the meantime we are still figuring out how to deal with the epidemic of youth e-cigarette use. There is concern that increased use of e-cigarettes by today’s youth may lead to use of combustible cigarettes by a population of kids who may not have originally understood how the nicotine in their e-cigarettes caused an addiction.

Of note, in a media statement this month, the CDC announced that just under 100 cases of severe lung illnesses have been associated with vaping in the past three months. Further information will be available as the CDC investigates these cases.

Practicing healthy behavior includes understanding what we put into our bodies. E-cigarettes have allowed many adults to quit smoking combustible cigarettes, but have made nicotine addiction in the next generation a significant concern for the future.

Want to learn more or have concerns about the potential health risks of e-cigarettes? Check out the All IN for Health resource hub.

Want to be involved in health research, including research on smoking? Go here to build your volunteer profile.

About the author:
Emily Poulin, PhD, is a cancer biologist who has always been interested in understanding how living things work. Her research background has translated into science writing and sharing her appreciation of biology, particularly through health-related topics.